According to a joint Decision № 26 dd July,12 1999, adopted by Antonov Enterprise and State Aviation Administration of Ukraine, in Kiev aircraft repair and overhaul plant № 410 began retrofitting An-26 and An-26B in the passenger version of An-26-100and An-26B-100 designed to carry 36 people. These aircrafts are equipped with additional portholes (four on each side). Reducing noise in the cabin is achieved through the application of heat and sound insulation and vibration-based coating materials “Fayrest-1″ and SKLG-6020M. The first aircraft what passed this kind of modernization was An-26B № 114-09 (UR-26072), what was demonstrating by Kiev aircraft repair and overhaul plant on different air show. Later on another aircraft № 121-10 (UR-26113) from A/C «Donetsk Airlines» was modified. According to the Operations Department of State Antonov Enterprise as of March 2002 10 more aircrafts were modified in Kiev, Rostov, Irkutsk repair and overhaul plant. Kiev repair and overhaul plant prepared an administrative version of An-26, designed to carry 19 passengers.

General characteristics of the aircraft: 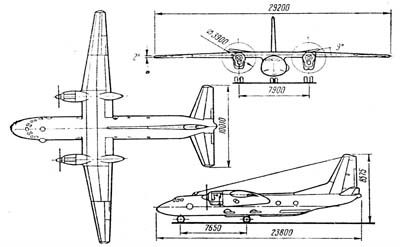 Currently there are two main versions of the An-26B-100: one for 31 passengers and for 36 passengers. AN-26 aircraft is modified to carry up to 36 passengers, baggage and cargo. Re-equipped aircraft can be used in the following variants:

• Passenger, for transportation up to 36 passengers;

• Combi, for transportation of up to 36 passengers (or other number of passengers upon customer’s request) and cargo up to 5500 kg.