SAAB 340 – is a passenger turboprop airplane designed by Swedish aircraft manufacturer “SAAB AG”. The airplane was designed to carry 35 passengers and equipped by two turboprop engines. Until the middle of 1993, there were manufactured more than 400 airplanes of this type and supplied to over 30 airlines worldwide as well as to a several major customers.

Some of the first serially manufactured airplanes were delivered to a Swedish airline “Crossair”. The airplane, designed as a cantilever low-wing aircraft with all-metal structure with selective use of composite materials, has a standard configuration, fit with high-durability pressurized fuselage, extendable tricycle landing gear with nose landing gear fitted by coupled wheels on each gear leg, as well as two wing-mounted turbo-prop engines. The Fairchild Company was responsible for design and production of the wing, empennage and engine nacelles, while SAAB was in charge for fuselage, all systems of the aircraft, flight trials and certification.

In 1987 there was produced a SAAB-340B aircraft which is a serial model up to nowadays. It possesses two CT7-9B engines with high output power, augmented range stabilizer, and yet higher maximum take-off weight – over 12928 kilos (28500 pounds).

Emergences of Saab-340B model influenced sales volumes, which were inevitably dropping down, having reached 200 machines.

The last modification trends of Saab-340B includes improvement of flight performance characteristics in hard climatic conditions and the option of reduced take off and landing by way of increasing length of the wings by 0.6 meters (1.96 feet). This increases the maximum take of weight of the aircraft by 544 kilos (1200 pounds) which is equivalent to the weight of 6-7 passengers. As well as Saab-2000 it has cabin configuration of the third generation, improved auxiliary power unit, along with low-pressure tyres which can be installed optionally.

General characteristics of the aircraft: 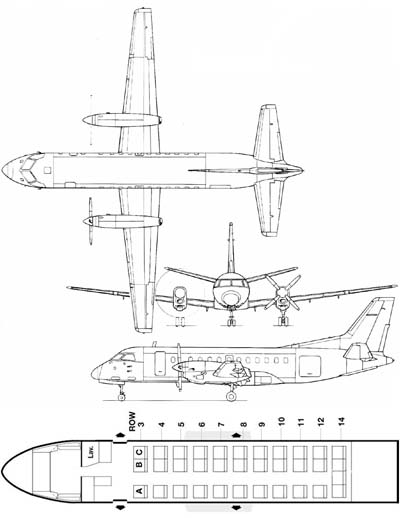