Cessna 172 aircraft of mass produced for 31 years, but in the mid-1980s their sales have fallen sharply due to the U.S. laws on which the producer was responsible for every incident that happened to his plane. The manufacture of Model 172 was ceased in 1986, but resumed after a change in legislation in 1996. The production version was Model 172R Skyhawk – 172N with the development of direct injection engine IO-360-L2A with capacity of 160hp and metal screw-blade constant pitch. The 172R deliveries began in 1997.

In 1998, the “Cessna” announced the development of Model 172S Skyhawk SP. The main difference was the 180-horsepower engine Textron Lycoming IO-360-L2A. Instrument panel was modernized, and it remained unchanged, bar graph type, up to 2009, till the installation in the cabin of two SP system display Garmin G1000, built on the “synthesized vision” and with the use of satellite navigation. In 2000 “Cessna” has produced a limited series Millennium Edition – an improved version of SP. 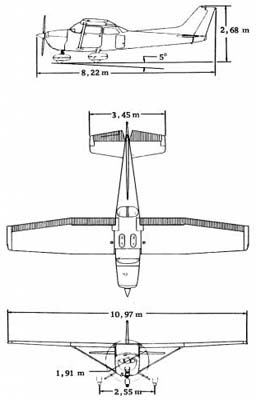